When Aaron isn’t fishing, he can be found playing with his daughters both 3 years and 4 months old. He is passionate about the future of fishing in Port Orford and hopes to preserve the next generation’s way of life in fishing. He is currently the President Commissioner of the Port of Port Orford to help advocate for this small boat fishery. Aaron enjoys simple living and respects both his community and the Ocean that sustains it.

It is safe to say that ocean fishing runs deep in his blood! Aaron Ashdown’s father, Mike “Cappy” Ashdown, came up from California and was a sport fisherman at the time who built salmon boats. He realized that there was a need for salmon fishing here and quickly became an old Traditional Salmon Fisherman. Aaron said, though he “does not have many memories there are photos to prove that he was out in the boat with his mother and father as early as 1 year of age laying on fish and doing what a 1-year-old does best out in the deep sea with his working parents.”  He grew up in and out of Port Orford as well as Nevada but came back for good in 2007. He is 1 of 4 children in the Ashdown family, all of whom are fishermen but having lost a brother, Rob Ashdown, out of Gold Beach he understands the hardships and strength of being a Fisherman in the Ocean. In 2006 his brother’s F/V The Ash was headed out to go crabbing but sank with three crewmembers aboard none were found. His brother’s passing is the real reason why he started fishing again. He came back and now fishes in honor of his brother, remembering his love for the ocean. He helped his dad for a while but eventually, 5 years ago he became a Captain of the long-lost family F/V The Misty. 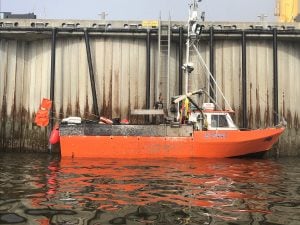 The Misty is a sister boat of his brother Orions’ boat the Aries both built-in 1976. It was, unfortunately, dropped at the Port and traded hands many times while Aaron eventually bought it and finished up the much-needed maintenance. The boat is set up as a longline boat ready to fish many species as well as crab. Though he enjoys fishing for salmon it depends on the day you ask him as to what species is his favorite. He does, however, enjoy fishing for rockfish and believes that rockfish need a little Funk and Soul music; he feels the good vibrations go through the line bringing on the bite!

Weather is the biggest factor when fishing in the ocean he says, “time doesn’t matter on the ocean, rather the tides and conditions dictate your life.” Aaron sells to all three buyers on the port and talks about the Fisherman and the Buyers as not just a needed relationship but rather a family unit. Fishing sustains this small town and without fishermen, buyers, and sellers, the town would be unable to sustain itself. In the Fall you can often find Aaron out in his boat catching the sunset and watching the termites fly around giving thanks to the days fishing. Thank you, Aaron, for your contribution!