Kenny is an old soul at heart whose main passion is fishing. He is a family man with a busy 2-year-old son and when he is not on the water, he is out swimming, tide-pooling, and hiking with his son.

He was born in L.A. and raised in Morro Bay, CA with his younger brother. He remembers many fun days surfing and has played in the ocean since he can remember. He grew up fishing often with his grandpa for fun but is now a 1st generation Commercial Fisherman. He has lived in Port Orford with his wife and recently his son for 6 years now and spends time fixing up his house along the Elk River and can be described as a man of many trades.

He built and finished his 32-foot F/V Ikura (Japanese for Salmon Roe) in 2008. It took him 2 years to build and the craftsmanship on the Ikura is flawless. His boat is equipped with an RSW (refrigerated seawater) system which drops and keeps the core temperature of fish down to 32 degrees instantly. Kenny’s fish are high quality! He enjoys selling to Co-Ops and local seafood cooperation’s because there is more of a consistent price, and they are more interested in quality fish with respect to the fisherman. 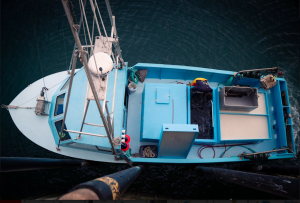 He is a Commercial Fisherman of 10 years now and enjoys traveling for both the fish and the people he meets along the way. He chose commercial fishing to be a life-long career because it allows him the freedom to work on his own accord and to be his own boss. Kenny has a smaller boat in the fleet so most often than not he fishes solo with no deckhand in the open ocean for 5 days at a time in search of the elusive salmon. Because of this, he is an aficionado at reading the weather and making predictions to ensure his safety. When he needs to, he will fulfill his lingcod quota as well as tuna but resonates more with a true Salmon Fisherman.

He learned his trade by watching, working hard, and asking questions. He feels that in order to make it one must figure it out by themselves so there was a lot of trial and error at first. He enjoys fishing for salmon because there is a lot to it. It is complicated and there are a lot of elements to consider to be a successful Salmon Fisherman. The species itself is not an easy one to target or find for that matter. Kenny relates to a very tight niche fleet of trollers who all work together and when the bite is on “everyone knows about it”!