Starting and ending your day in the dark would seem to be an exhausting lifestyle. For, Captain Chris Partee of F/V Top Gun, it’s a reality nearly every day, but one that is more than welcome. To Chris, this daily fishing experience is a gift—getting to see the magic of the ocean “coming to life with the rising sun”.

Captain Partee comes from a long line of grizzled, salty, and hardworking fishermen that have called the ocean and the deck of a boat home for generations. Fishing raised Chris, he saw captains as father figures, found comfort and family in the close-knit teamwork of a crew, and discovered a true connection to fish and their environment. He recalls his younger years of working in the fishing industry with admiration, “the closeness you get when you are out on the water is like nothing else. There is this sense of family, a group of brothers” After fishing for a fleet out of Bandon for three years, when he was 16, Chris shipped down to Port Orford to fish with his step-dad and he hasn’t looked back since.

Chris’s love for fish and respect for the ocean began when he met Jeff Miles, then Captin of Top Gun, and helped him conduct critical fisheries conservation research with Oregon State University. Chris was a part of the team that not only started the Redfish Rocks Marine Reserve, but he has also been pivotal in the efforts to see Port Orford’s fishing resources and community sustained for future generations. A true role model for sustainable fishing practices, Chris explains that after spending so much time on the water “you learned to fish a spot and then leave it alone for a while. You never wanted to hammer one spot over and over.” While this concept seems simple enough, it is key to preserving the fishery—developing a relationship with the ocean where you only take what you need.

After suffering a devastating injury in a car accident, Chris was forced to take some time off the water for about four-and-a-half years. That time allowed him to be a stay-at-home-dad, spend quality time with his family, and spread his love of the water with his four kids. Despite his setback, the ocean kept calling.

In 2017, Chris was able to get back out onto the water—working his way up the ladder from deckhand to deck boss to now, captain. At first, he wasn’t sure if he could handle every aspect of the mentally and physically demanding work that goes into just a single day of fishing; however, Chris takes it one day at a time because life is precious and being out on the ocean is where he feels most alive.

The 32-foot Downeast boat Chris captains, Top Gun, embodies the unique and diverse spirit of Port Orford’s fishery—garnering the nickname “The Little Transformer” because it is a boat that fishes for it all. With everything from crab, salmon, black cod, tuna, lingcod, and rockfish, the ocean ecosystem out of Port Orford boasts some incredible opportunities for Chris to practice the preservation approach he preaches. On any given day, it isn’t uncommon for Chris to fish long-line techniques for rockfish until his boat is full, then come into Port, change out gear and head back out with crabbing or jigging gear. 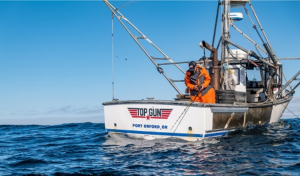 As someone who feels he was “born in the wrong era,” Chris appreciates the simplicities in life, and the ocean is where he finds that same inner balance. “You have the necessities and nothing more”—he thrives in the isolations, thrills, and challenges out on the ocean. It’s not just finding the fish or keeping your boat afloat, but also how your crew is working together. Chris has found one special practice that his whole crew uses to find success out on the water, the perfect playlist. “Top Gun Jams to anything!” Chris explains with excitement: when live fishing he goes with “good vibes” and for crabbing, he plays techno to try and get into the power of the music and use that to develop a rhythm that matches the harsh grind of crabbing. Sometimes, he opts for complete silence.

Captain Partee chooses this way of life because he finds freedom out on the ocean. It is a place where he is not ruled by the clock, but instead by the wind, the waves, the tide, and most importantly, his attitude. Attitude, he stresses, is the biggest factor out on the ocean: “the weather is what it is, you can’t change that. But, you do have the freedom to choose your attitude throughout the day and that makes all the difference.”

As a man who has a love for his community, a respect for the ocean, and a drive to keep working on the area’s sustainable future, Chris personifies the same values of Port Orford that watched over him as he grew up—ones of care for others and a desire to make this community and its environment the best it can be.